How To Sound Like A Pro When Buying Guitar Strings

(Even if you aren’t one yet)

Jaded guitar shop salesman: “Certainly. Which type of strings do you want?”

JGSS: “Well, yes. All guitar strings are ‘normal’, it’s just that there are several types. What kind of guitar do you have? Electric, Classical or Acoustic?”

HNG: “Just a ‘normal’ guitar, you know. It’s pretty old. My dad used to play it and I was thinking of starting out myself. What strings can you give me for it?”

Since I’m sure you can see how this conversation can end up being really embarrassing, I’m going to clear the confusion about guitar strings once and for all.

There two main ‘families’ of guitars: electric guitars, and acoustic guitars. The latter are then split into two main sub-families, which I’m going to explain soon. Let’s start with electric guitars first.

What Makes A Guitar ‘Electric’?

As far as choosing guitar strings is concerned, there’s one feature which matters above all others:

Pickups convert some of the vibration energy of guitar strings into a small electric current, which can then be boosted by an amplifier to drive loudspeakers. Magnetic pickups work on the same principle as electric generators. They basically consist of a coil of thin wire wrapped around a magnet. This arrangement generates an electric current whenever something in the vicinity disturbs its magnetic field.

Only magnetic materials (meaning materials which can be attracted with a magnet) can make magnetic pickups work. Non-magnetic materials do not interact with the pickup’s magnetic field and will not generate any electric current. Therefore, only steel strings will work on electric guitars.

To be more exact, strings for electric guitar are typically made from a mix of steel and nickel. However, everyone will know what you mean if you ask for steel strings.

If you are in doubt about what magnetic pickups look like, here are some typical examples: 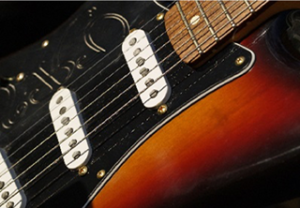 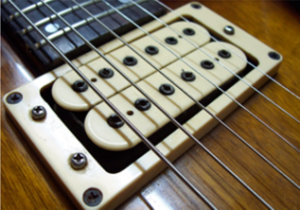 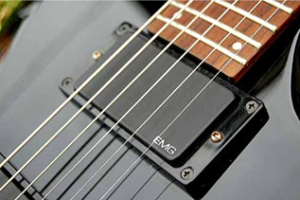 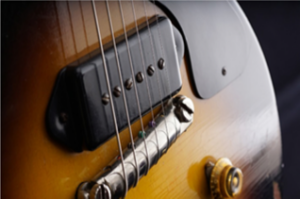 There are variations in pickup design. Some are ‘single coil’, some ‘double coil’, some have covers for cosmetic purposes and some don’t. However, they all work on the same principle. So now you know that if your guitar has magnetic pickups, only steel strings should be used on it. Otherwise, your pickups won’t work. There will be no electric signal coming out, and your cool electric guitar will have been reduced to a lame acoustic guitar. Which brings me to the next section.

Acoustic guitars…or are they ‘classical’?

This area actually causes the most confusion, since there some distinctions to made between things that might appear identical, and to add to the complexity, often different names are used for what really IS the same thing.

To put it simply, ‘acoustic guitar’ is a catch-all term for guitars that rely on the acoustic properties of the guitar body itself to produce sound, without needing to be amplified electronically. You can think of acoustic guitars as ‘non-electric’ guitars and you’ll be on the right track. Acoustic guitars have a relatively large and hollow body with one or more ‘sound holes’ through which the string vibrations excite the whole guitar body to vibrate in sympathy. The body itself thus acts as a natural loud speaker.

So, what about the term ‘classical guitar’? Here’s how to frame it correctly:

Classical guitars have some distinguishing features unique to them:

The photos below illustrate the body, headstock and bridge designs of traditional classical guitars. 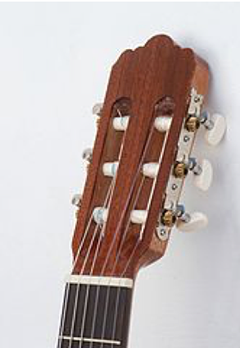 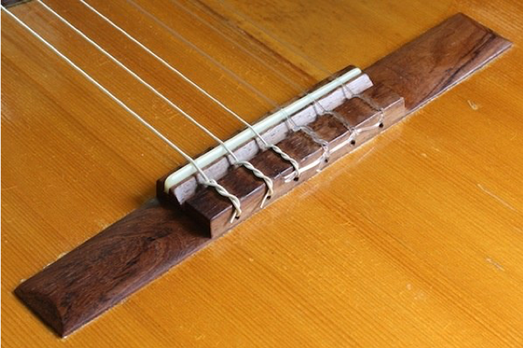 Classical guitars are also sometimes called ‘Spanish Guitars’. Both terms refer to the same type of guitar, although it remains to be seen if the person using either term really knows what they’re talking about!

If your guitar is of this type, then it’s intended to be strung with nylon strings only, and to be played finger style (not with a pick). Note that although we call them nylon strings, the bottom three strings are actually a nylon core wrapped with silver wire, whereas the top three strings are plain clear nylon.

People often get confused in one or two ways when it comes to classical guitars:

Here the designs get more varied, as well as the names. You might hear terms like ‘Folk Guitar’, ‘Western Guitar’, ‘Dreadnought’, ‘Jumbo’ and more. The important thing to understand is that all these types are acoustic guitars (which means, not electric), and are not classical (which means, do not use nylon strings). On all these more modern acoustic designs, you have the option of two types of strings: steel, or bronze. 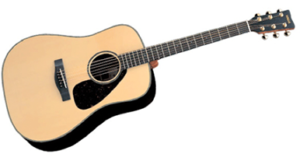 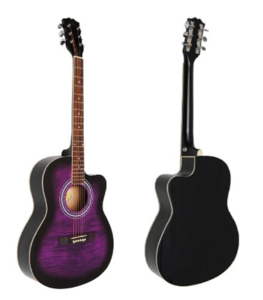 Other Hybrid Types Of Guitars

There are some other types of guitars which may be less common, but worth knowing about.

These are basically electric guitars with larger and partially hollow bodies, as against the fully solid bodies of ‘pure’ electric guitars. Typically, they are easily identifiable via their shape and one or more ‘f holes’ on the body top, reminiscent of the ‘f’ shaped sound holes in violins. Nevertheless, these guitars still have magnetic pickups, so treat them as any other electric guitar: steel strings only.

These are modern style acoustic guitars and look exactly like them, but they have a ‘piezo transducer’ added underneath the bridge and have a jack socket through which you can connect the guitar to an amplifier. This transducer picks up the vibration of the strings and body and converts it into an electric signal. However, unlike magnetic pickups, the piezo transducer produces an electric signal via vibrations directly, rather than through magnetic interaction. Therefore, you are not restricted to steel strings only in this case, and you can choose either steel or bronze strings just like on any other acoustic guitar.

A bit less common, these are classical guitars to which a piezo transducer has been added as well, allowing it to be amplified. Since the construction and intended use is exactly like a plain classical guitar, use only nylon strings in this case.

So, there you have it. Now you know and understand all there is to know about which kind of strings go on which types of guitars. To summarize:

Oh, another thing which will probably crop up is what ‘gauge’ of strings you should get. Gauge simply refers to the thickness of the strings. The heavier the gauge, the thicker the strings and the more tension needed to tune them to pitch. Conversely, a lighter gauge means thinner strings and less tension.

If you are just starting out and have not developed any preferences yet, here are my suggestions:

For electric guitar, get gauge 9 steel strings. They are the most popular type and what you’ll find fitted as factory standard on most electric guitars

For modern acoustic guitars, you typically want to go a bit heavier. Gauge 10 or gauge 11, whether steel or bronze, will usually work very well for most people. Also, you might want to try both steel and bronze strings to see if you prefer one type over the other.

For classical nylon strings, these do not come in gauges, although you may be given the choice of ‘light’, ‘standard’ or ‘heavy’ tension sometimes. I suggest you pick ‘light’ or ‘standard’ string sets in that case.

Whatever you do, now you know better than ask for ‘normal strings’ or anything of that sort, unless you want to see your friendly guitar shop salesman cringe and die inside a little. 😊

Aldo Chircop is a guitarist, composer, producer and guitar teacher based in Malta. He is president and chief instructor of Malta Rock Academy, home of the best blues, rock and metal guitar lessons in Malta.