Find Out What Our Students Say About Their Lessons:

Before I joined Ultimate School of Music, what I could do on guitar was pretty limited.

Through the lessons I’ve been introduced to all the different types of modes… and all the different vibes and feelings that each note can bring. So that really helped with the richness and expression of my playing.

I’ve always wanted to play guitar and have had a number of starts over the years. I never quite got past the basics and my confidence was low. Then I found Ultimate School of Music and haven’t looked back. Lisa and Daniel are friendly, approachable, professional, encouraging, supportive, highly organised, eager to help, and non-judgemental. No egos here!
In class, I’ve watched Daniel adapt and switch to all different types of teaching styles depending on the individual learner. I’ve never met such a flexible and knowledgable teacher. I’m always just the right amount of challenged. Highly recommend!

Since I started at USOM I’ve noticed quite a few differences. I’ve only been here 3 or 4 months and I’ve made significant progress – more progress than I made when I was a teenager and played for 3 or 4 years on my own.

Another thing is I’m able to learn a lot more complicated songs, ones that I never would have even looked at before – and I’ve been able to learn them from start to finish.

I don’t know much about the different theories or methods of teaching music, but from what we’ve experienced/observed, your emphasis on instilling a genuine passion for music (regardless of ability) seems to be the perfect foundation for lifelong engagement and self-directed learning/development. Far better than developing proficiency on an instrument without any real love of playing music.

Our daughter’s progress on guitar (regardless of external metrics) has also had obvious self-esteem benefits. As contemporary wisdom tells us – “Compare yourself to who you were yesterday, not to who someone else is today”. Guitar has increasingly become one of her ‘go to’ places/activities to decompress from the pressures of life.

I’ve been coming to the school since [around 4 months ago], so a relatively short time, but a lot was done in that short time. All round improvements, my understanding of the theory, the practice, and actually really enjoying playing and accompanying myself. Generally all round improvements – fantastic!

I came along and my goal was to learn maybe a dozen songs I could strum along to; those goals have been thrown out now and now I really want to understand a lot more about the theory of the guitar, and play melodies as well as chords – and that’s coming along slowly but surely. Yes, my goals have changed considerably as I grow in confidence within myself.

I have on and off in the past hundred years(!) gone to teachers and then given up because it just wasn’t enjoyable or I wasn’t making progress – and I appreciate that it’s down to yourself to practice – but the sessions (here) are hugely enjoyable, they fly, 2 hours becomes a very short period of time – a very different style. I really like the mixture of practical and theory – an all-encompassing knowledge of how to play the guitar So that’s been great.

I could play some slightly complex songs but it took me a really long time to learn them. Whereas now, with the skills that I’ve learned, I can look at a new song and recognize the patterns. Recognize in the solo, the pentatonic. And the same shape for all of them, so it’s like I can see connections now that I couldn’t before. And so I can learn harder songs faster.

I knew some stuff about which chords were which, and some of the notes. But then, when I learned the pentatonic, some theory behind which chords are in which key, what chords go together, how you can make a solo more interesting by adding more notes in. And then I started to see patterns and connections that I hadn’t before. Even when I listen to music now I hear some things I might not have noticed before.

When I learned scales on the piano it was just to be able to do it. But now when I’ve learned a new box shape, I can turn on a song and play along. So it’s immediate results. And then you want to improve so you can kind of play the way you want to in your head maybe… the way you can hear.

I’m suppose I’m getting [closer to being able to] play by ear, that’s the ultimate. I feel like I’m MUCH closer to that now than I was before. My speed and picking also improved, before I was just picking always down. Now I’ve started doing alternate and directional. That makes a big difference for those tricky solos.

I don’t see my guitar as work anymore, it’s just something I do for fun AND I make progress at the same time. I wish I could feel that way about college! 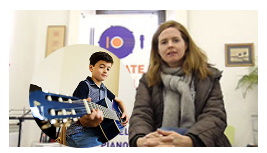 My son Daniel has been coming to guitar for a year and 4 months now. It was his first time to take up an instrument. He’s getting on really well, he really enjoys it because the guitar is portable and he can take it anywhere; he loves coming here, it’s given him a sense of pride. The encouragement he gets from family and friends keeps him motivated. He often comes home from school and he’ll take out the guitar and play away. I think it’s a de-stress mechanism sometimes; if he’s had a tiring day at school he’ll switch off and play the guitar – I think it’s really helped his concentration in school as well. It’s all been really beneficial.

I would highly recommend Ultimate School of Music because the teachers are fantastic, they are really interested and motivated. They also have a relationship with the students which is very natural. Daniel looks forward to coming in. It’s been an amazing progression. He has a great repertoire of music now, he can play up to 20 songs. He likes to show off his skills! From not being able to play anything, to being able to play full pieces of music. We have a great sense of pride in him because we enjoy listening to him and he enjoys playing so we’re all winners. We’re all very impressed! 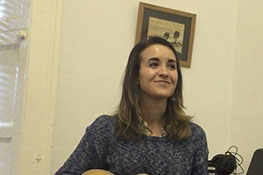 [Would you recommend the school?] Definitely, definitely… my favorite thing about the school is it’s got such a good sense of community. So you’re coming in and you see so many friendly faces and even from going to the concerts and everything as well you get chatting to so many people as well. You really look forward to coming here every week!

I was so surprised at the huge broad ability in the guitar, it’s a whole universe. That became more and more exciting, seeing there’s a huge depth and breadth… it’s like oh my god, I’m never going to be able to play it! I think that’s really good, when you discover an instrument. I would [recommend USOM], I think it’s brilliant. I think you learn straight away, and that’s amazing isn’t it! Thank you, I’ve learned a huge, huge amount and I think you are a brilliant teacher. Thank you!

“Leo is enjoying his classes quite a lot. He made great progress in the last 12 months and he is extremely motivated to keep on.”

“I have been trying to teach myself how to play the guitar for over a year, with little success.  What a difference a great guitar teacher makes.  I have loved my first 4  week on-line beginners course.  Daniel is a great teachers and I have learnt so much already.  I can already play a couple of songs and will definitely continue my guitar journey with the Ultimate School of Music”

“I really like the class! You were descriptive but concise enough in explaining the concept and telling what we were supposed to achieve at the end of the practice. I think you did really well in dividing the attention and focus on each person’s difficulties. While doing that I can try by myself without feeling left out. To an extent, the method gave me enough motivation to keep up with the others but at the same time to just go with my own pace.”